Time to get away from winter. 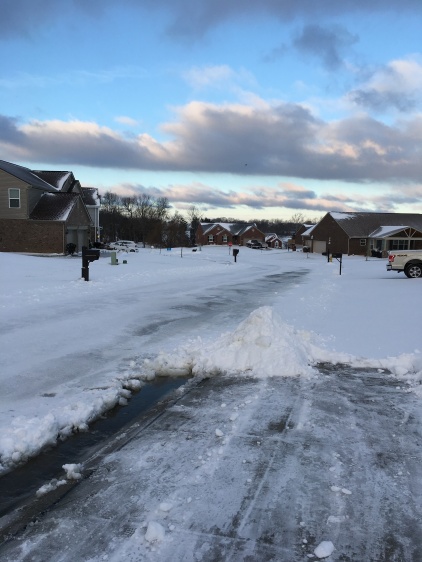 What better than a group bike ride from Miami to Key West to avoid the snow and cold? Last January, we went to Florida after the New Year to get away, and it was cold! This year, farther south, we found the weather not just sunny, but also warm.  Our ride was expertly organized by Charleston Bicycle Tours. It was fun for both of us, and it was like summer all day and night on the Keys.

Bonnie, a fellow traveler, put a video together of the ride. It summarized well our travels, with the exception of our not seeing the park at Dry Tortugas on the last day. Enjoy: https://youtu.be/iNhEnM1tvBw

Our first ride was about 24 miles and went from Coral Gables to the Bill Baggs Cape Florida State Park at the end of Key Biscayne. We were happy to walk up the 112 steps to the top of the light house at the park. The ranger was good to only allow a few people to go up and down at a time as it was narrow on the circular steps.

Our first key was Key Biscayne. In order to bike the Keys, our tour centered three rides from Marathon Key. So, after our lunch in Miami we were driven with the bikes to Marathon Key for our first of three rides from the middle of the Keys. We did enjoy the Florida tradition of viewing the sunset each night as we stayed in the area.

Our stay on Marathon Key was well done. We were driven out and rode 40 miles back to our hotel.

Start of the 40 mile ride

We started near the big stone crab and enjoyed the views along the way.  Despite me and another rider having two flat tires on the ride, we still had a great time. It helped that instead of changing the tire, I was given a different bike. I rode three that day.

The pictures do not do justice to color of the water.

It was great to ride the bike path and not just along the side of the road. We were pleased that several miles were on the path along the road between the Keys. It was enjoyable when we had some shade on the bike path. As you know, trees create shade along path but also sometimes break up the path making it harder to ride. We also rode along the road.

My favorite bridges were the ones with a separate bridge for the bikers. I believe they are locally called fishing bridges, and we saw plenty of people fishing from the bridges, including a lot of pelicans perched on the bridges hoping to get to the catch before the fishing line did.

We enjoyed riding on both sides of the road as the path changed sides periodically.

As the journey got close to Key West (the end of the road for our travels) we occasionally were riding against traffic. For me, this was the first time since I was a young child that I was riding opposite the traffic and it was really a different experience for me. I guess I am used to riding along the same side as traffic.  The best part of our direction, regardless of the side of the road we were riding on, was that the wind, which was strong for most of the ride, was generally at our back. The few times we rode into the wind it was a different experience.

A ride on Big Pine Key and to No Name Key was fun. We liked the dollar bills all over the No Name Pub. We learned that the pub is on Big Pine Key and not on the key called No Name. We also had the opportunity to visit the Florida Keys Wildlife Society. We saw one Key deer on our ride and learned a whole lot more about them and other wildlife at the visitors’ center. One of the things we noticed is that the Key deer are smaller than other deer. As a group, we came up with the saying, “In Texas everything is bigger and on the Keys it is smaller.” I just watched the deer and did not get a picture of the deer.

The Key West Museum of Art & History at the Custom House. We really thought this was a good museum to visit and was a good representation of Key West.  The museum was a recommendation from our guide. The building alone was fun and interesting. The many exhibits were well done and we thought Guy Harvey Sketches of Hemingway’s “The Old Man and the Sea” that went up the main staircase and was great to read and see come to life. The museum has a Civil War exhibit about the Keys, the railway and the impact of the railway on the Keys. Outside of the museum they had several life-like works of art that we at first took for people.

The Key West Butterfly & Nature Conservatory was a great end to the day of biking around Key West. The trees in the conservatory were alive with all the butterflies. It was amazing to see so many in one place at one time. When we walked in, we could only say wow at the beauty. Well worth the admissions price to visit. We were surprised by the two pink flamingos walking around oblivious to us and the butterflies.  They were a good addition to the butterflies.

Look at that butterfly

The Key West Hemingway house and Museum was good to see, although we just passed by to look and did not stop in. Hemingway apparently put Key West back on the map and was the number one tourist attraction for many years.

Mile Marker Zero on US  1 and Southernmost Point were highlights of the journey.  We had told others of our pending trip and the Southernmost Point was mentioned by them frequently. It was fun to have our picture taken here. Everyone in line for the point was polite, and several people waiting took pictures for others who were ahead of them. It was great to see people getting along. The Mile Marker Zero on US 1 was not as popular, judging by the lack of a crowd at the marker compared to the line we waited in at 8:30 in the morning at the Southernmost Point marker. 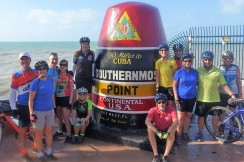 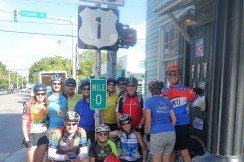 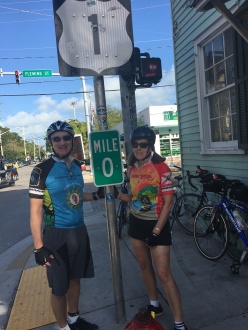 We also saw roosters everywhere in Key West. They are apparently a thing in Key West and protected as well by local law and custom. Some of our fellow travelers could hear the rooster call early in the morning; we were glad they were not outside of our room. 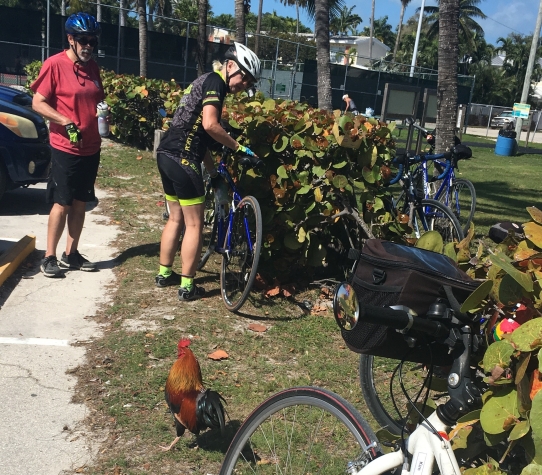 We took a side trip on our non-bike afternoon to kayak in the Atlantic and through several mangroves. The Blue Planet Kayak company rented us a couple of kayaks and gave us a map to explore. We are sorry we could not make the timing on their tours. We really enjoyed paddling through the mangrove and we even saw what we knew were crabs that looked like spiders climbing the trees. While we were out on the water we heard before we saw fighter planes from the near by Naval base. 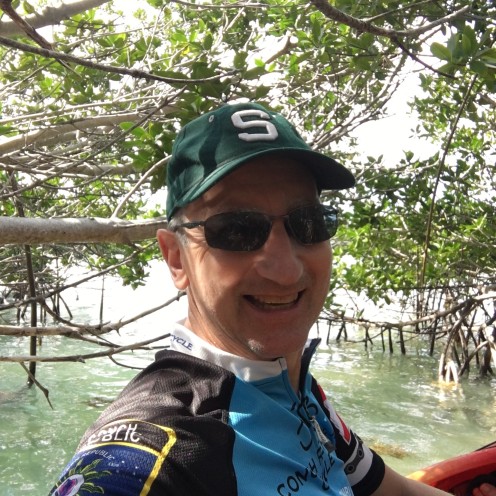 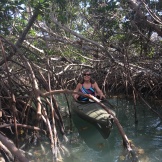 Riding across the 7 mile bridge, twice, was fun. The first time was going across to Big Pine Key, and the next day we rode across again on our 50 mile ride to Key West. The side for bikes was wide and I was able to get up to a pretty good speed on the bridge with the wind at my back. I did miss my bike clips and the dropped handle bars when a big truck passed. Seeing trees grow out of the railroad bridge that is no longer in use and the color of the water was surprising. This is the longest bridge I have ridden on, although not the tallest.

Group completing the second ride over the 7 mile bridge

Sunset cruise was the right introduction to Key West on our first night at the end of the longest day of riding (50miles). 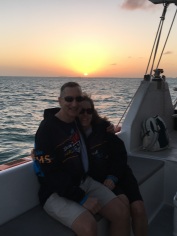 We had our end of the week sunset dinner on Sunset Key at the Latitudes restaurant. It was a wonderful sunset and we all enjoyed the delicious dinner with our friends from the week of bike riding.

The paintings on the waterfront brewery were really interesting to look at.  We thought we were at an aquarium and were surprised that a brewery would undertake such a great art project. Next time we are in town we will have to take a brewery tour. 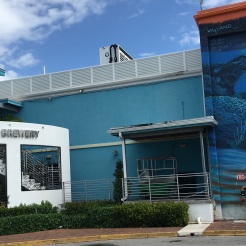 Key Lime Pie contest –after dinner on our last night we had a key lime pie judging contest. I think all our friends at home would have enjoyed it. My choice for the number one pie came in second place. They were all good and we had fun.

A ride is better with friends. Thank you to all who rode with us; you were great company and help on the ride and during the week. 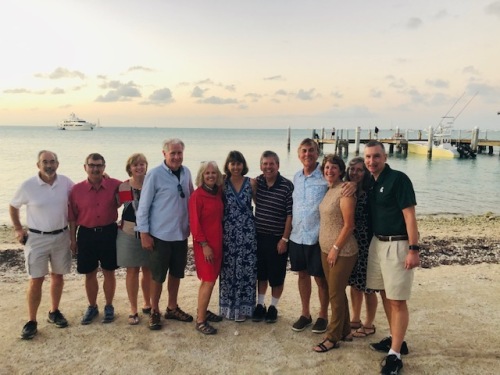 Key West was an interesting and tourist friendly town and we had a good time exploring. It was better as a group at night as a lot of people are on the streets. I am glad our guide knew the way to go. 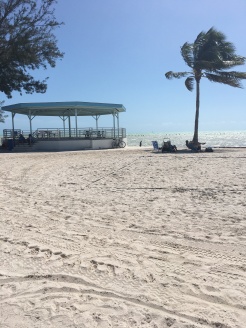 We had some really good dining experiences along the way. I did not take pictures of the meals. We really liked the tapas, a bunch of small dishes that the group shared. That was delicious!

The view from the last night’s dinner overlooking the beach with the palm trees and the open air was not just a good meal but also a good experience. 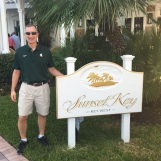 We biked over 150 miles during the week. Our longest ride was 50 miles in one day. We did not break any speed records; our goal was to enjoy the surroundings, and we did.

By Retirement Travels with Glen in Biking, Famous Places, Travel on March 16, 2019.
← No One Parties Like a 90 Year Old! Cincinnati USA →