Last July, Kim went to visit her parents and had what we now refer to in the family as the St. Louis biking, shooting and drinking trip. Our daughter Sarah went on the same trip in April along with Kim’s brother, minus the biking.

For my pre-retirement/birthday trip it was time for me to go biking, shooting and drinking in St. Louis. Kim and I have ridden with the Bike MS team for several years and are behind in our miles ridden this year. Our biking portion was a ride from the in-law’s home to Grant’s trail.

On a few mornings we saw several of the Budweiser Clydesdales out grazing at Grant’s Farm along the trail.

Four of the 50 horses out in the morning enjoying the grass. This is 10 feet from the trail.

My father in law Butch invited me to go to the shooting range for the shooting portion of my pre-retirement travels. He is currently qualified on the range and was an instructor for his fellow police officers. I took advantage of the safety briefing, about an hour, and the shooting at the range, along with another briefing on firearm safety. I eventually shot a 357 magnum, and the gun has a kick. My memory is seeing the flames shoot out of that gun as it was fired.

Many of you who know me well are surprised at the drinking aspect of the trip. Of course, if you know Kim, you are even more surprised. Here is how it went down… Still enjoying a great weather day in St. Louis, we went out to lunch in the Soulard area of St. Louis at a place called Hammerstone’s. 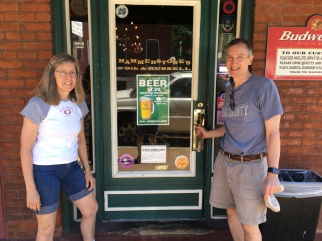 We ate out on the porch area in the shade and enjoyed a great taste of St. Louis. Kim had the toasted raviolis and that was a treat. Pat and Butch shared a meal; they apparently eat less as they do not bike the same way Kim and I do and we enjoyed ourselves.

After lunch we toured the famous Anheuser-Busch brewery. Yes, they still provide free samples as a part of the tour. We saw more Budweiser Clydesdales out enjoying the day. The tour was interesting; the samples were great! (Drinking!) Yes—I did the sampling of the beer and it was good. Kim passed this time as it was my drinking tour.

Getting ready for the tour

After the brewery tour we had to stop at the St. Louis icon Ted Drewes.  I had the concrete and Kim and Pat had the hot fudge. It was good and we did not have any left over. Butch does not like Ted Drewes but still drove us to get our treat.

As part of the fun in St. Louis we went out to the Hill for a visit with some friends and relatives also in town for the same high school graduation. The restaurant, chosen by one of Butch’s brothers, was Rigazzi’s. You can see the small glass in front of Kim’s uncle (more drinking?). It was great for them to connect.  Who knew retirement was so active! 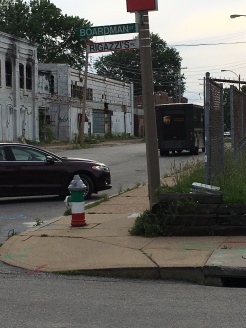 Nice colors on all of the hydrants!

Hoome of the fishbowl

Of course we went to St. Louis after Memorial Day to see my niece graduate from high school. The ceremony went really well and it was great to see her graduate. We stayed until Sunday to attend the graduation party, another day for friends and family (yes, more drinking). It was great to visit and be a part of the celebration.

As a part of the visit I asked “How do the In-laws do this retirement thing?”

Butch exclaimed they get all of the same things done in retirement that they have always done. Just not in the same hurry or the same day. Sure enough, he spent some time every day working on a project on his deck that is still not complete. Now, I do not think he was trying to prove a lifestyle point, I believe he was just doing what he does. He is one of the most optimistic guys you could meet. He is quick with a smile and always says hello.

We had Imo’s pizza and took a walk to Webster University where I received my MBA. The campus has grown.

Yes–we did our bike ride in Webster University bike shirts–so it was only fitting to walk over to the campus.

Trip by the numbers:

By Retirement Travels with Glen in Biking on April 2, 2017.
← Coming Soon–first travels Celebration, Certification and Caves →