Now that the long bike rides and triathlon are over, relaxing in the Great Smoky Mountains National Park sounded like a good time. 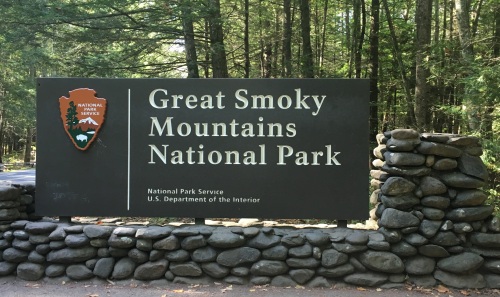 When we booked our cabin and planned the trip we were unaware that October is one of the busiest times for the park. We also did not know that this was the busiest National Park. One of the benefits of retirement travel is going during the week. We were surprised at all of the people gathered in the park and Gatlinburg. I guess Columbus Day is a popular time for schools to take a break; we visiting the week prior to the break. We thought traffic and the number of tourist picked up as we got closer to the holiday weekend. 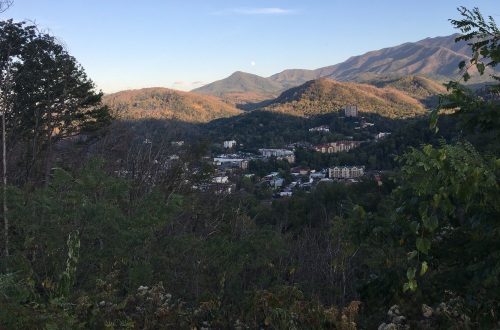 One of the downsides was that parking to hike was at a premium. However, like a good restaurant that is always full, we found that the experience and scenery were worth the hassle.  Traffic in Gatlinburg and Pigeon Forge was also heavy as we went through town. We have been to the park before. This time we were happy not to see any bears as we were hiking 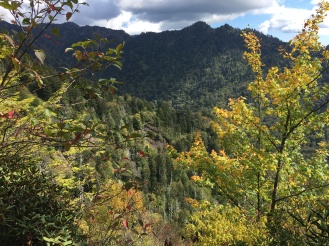 We had a cabin away from town and up a hill so we could enjoy breakfast and linger a little out the front porch. The cabin had large windows and offered a great view of the mountains. We did see the “smoke” in the mountains in the morning that looked inviting. 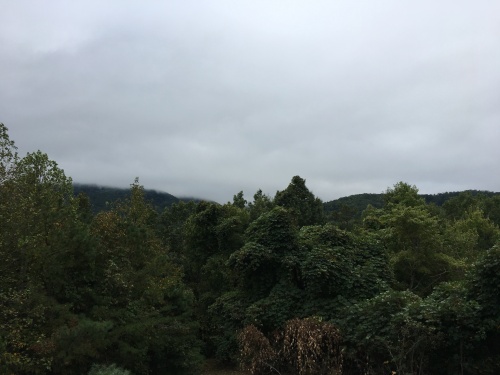 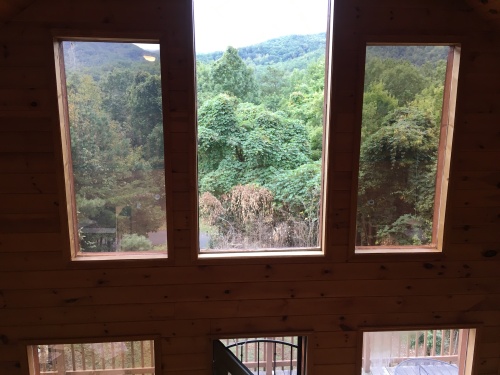 Our afternoon hikes were good. We had spent most of our previous time in the southern part of the park (Cades Cove), so we hiked in the middle of the park this time. 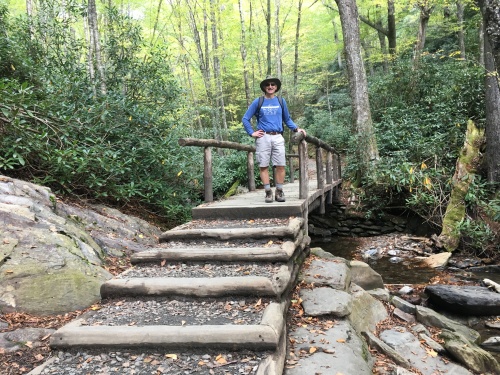 We noticed that the signage on the hiking trails in the park was lacking or had been removed though too much use, but it was easy to find our way as several other hikers were on the trails with us. 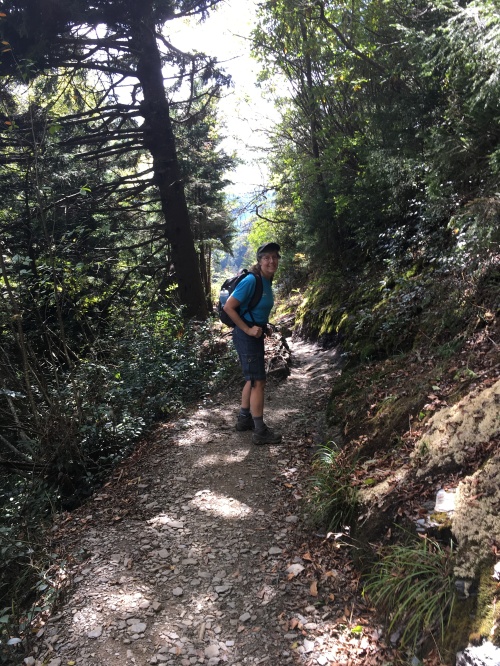 We enjoyed the hikes and the views. It was great to have some hand holds as we went up and down near the edge on the hikes. 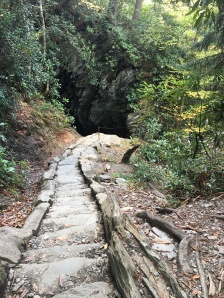 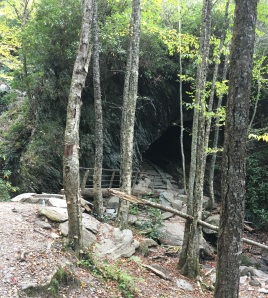 The National Park Service has done a good job keeping the trails in good condition given all of the traffic on them we encountered except for the signs while on the trail. 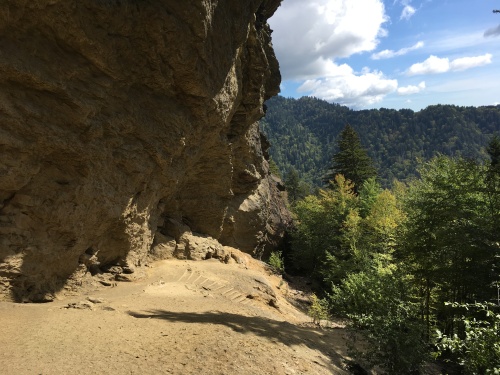 There are plenty of hikes we have not yet taken in the park. We will have to come back and enjoy some of them on our next visit. Now we know to schedule the visit outside of October. 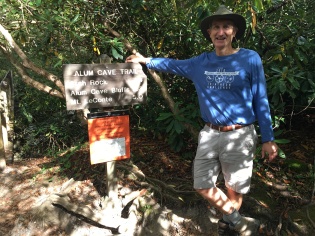 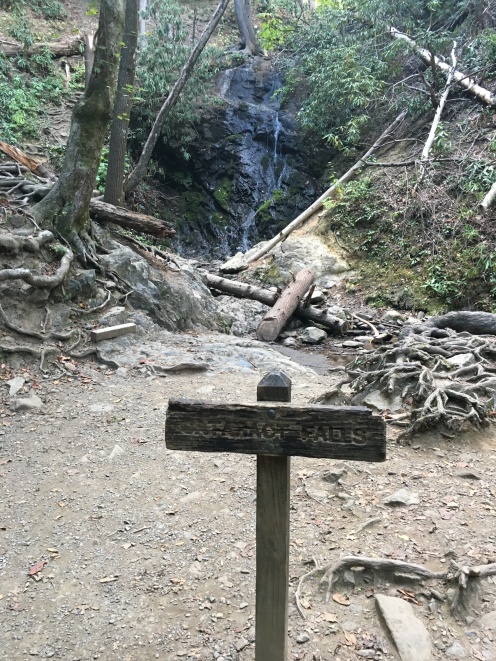 The colors had not yet come out to the park. We did see some of the trees turning early here and there. The week after our visit was probably a peak time for fall colors. We enjoyed the lush green views and left the pretty colors for the visitors for the following week. 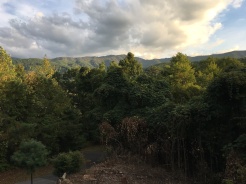 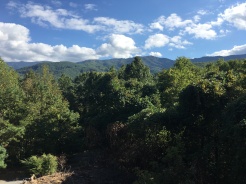 We purposely went back home on the back roads from the Smoky Mountains National Park (which is in parts of Tennessee and North Carolina) so we could stop at the three state Cumberland Gap National Historical Park.

The weather on the Saturday when we arrived in Kentucky was cooler than it was in Tennessee as we were leaving. Our first stop in Cumberland Gap was at the only visitor center. This is a large park and it was important to know that there is only one visitor center.

We were happy talk with a couple making apple butter over an open fire and dressed in period costumes. It looked like hard work. They assured us that the taste was worth the work on the open fire. We liked the warmth of the open fire. 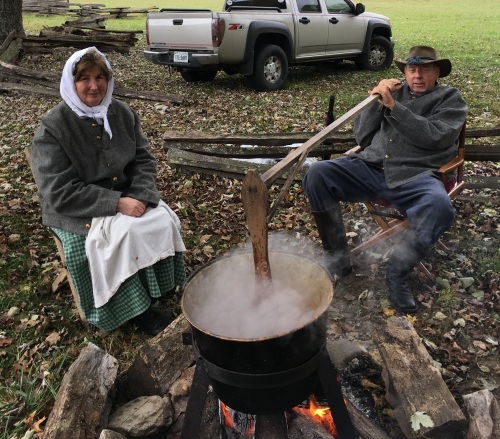 We took the tri-state trail and hiked up and stood in the three separate states at the same time (Kentucky, Tennessee and Virginia). It was interesting to see the contour of the land and to know that many western settlers had journeyed across the mountains where we were hiking. 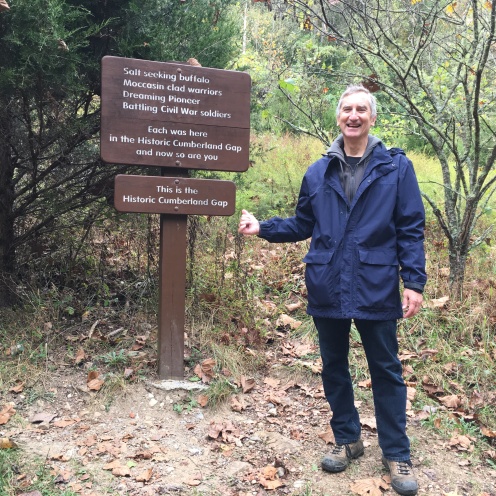 When looking at the road into the gap we wondered how much harder the mountain pass must be, as this was not an easy climb. We do not have wagons with all of our possessions and have no real idea of the hardship. 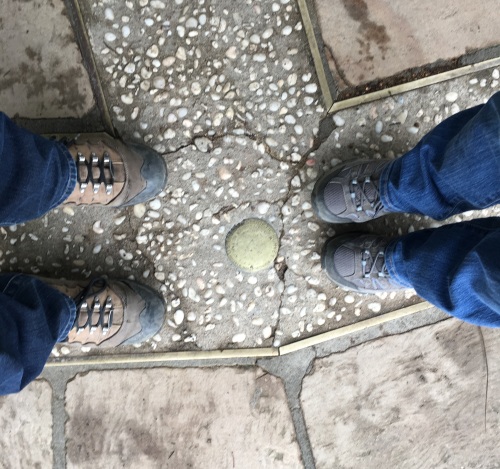 The Civil War had a lot going on in Cumberland; we enjoyed the side spots where we could see evidence of the forts and the places where some of the troops moved through. It did make sense that the troops came by and through the gap in the struggle to move across the country. 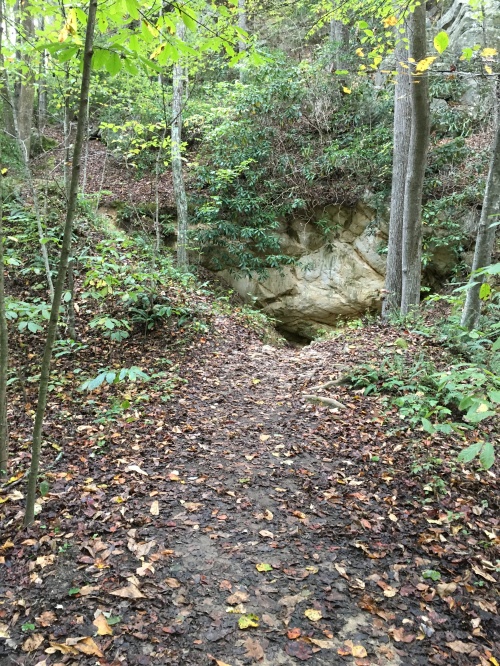 I recommend driving up the road to the pinnacle overlook, although it twists a whole lot. At one point you can see the road next to you as the road almost doubles back on itself. 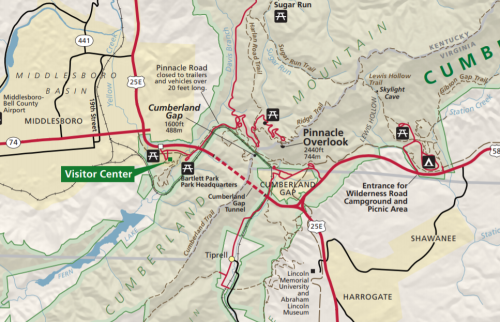 The paved paths along the viewing area made the walk out to the view easily assessable. Unfortunately, the view was one where we could see the clouds as the weather was not in our favor. We caught glimpses of the surrounding area and will look forward to coming back for a better view in the future. 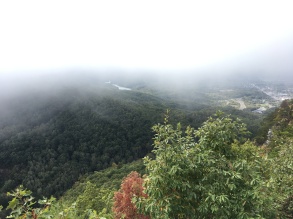 We can get to the Smoky Mountain National park in about 5 hours. We should plan to go before or after the peak times for the park, staying away from October (Columbus Day for example) and school vacation week in the spring.

Both Cumberland Gap and Smoky Mountain National Parks do not require admission fees.

Cumberland Gap has hundreds of miles of hikes available. We are thinking about spending more time visiting this park in the future.

We enjoyed two dinner shows and would have liked to have gone for another. We were amazed at the horse handling skills demonstrated during the show at the Dolly Parton’s stampede  and the Hatfield & McCoy Dinner Feud. The dinners out were fun and since it gets dark in October so early we had to leave the trails earlier than we would have during the summer.

Our preference was the Dinner Feud. It was a little smaller theater and we had a lively and interactive server. We found that we liked the food better at the Hatfield’s than the Stampede. The musicians for the Stampede put on a great show prior to the dinner and gave an amazing performance. Of course, the horse-riding feats were exciting to watch and they were well executed. We appreciated the good clean family entertainment at both shows. 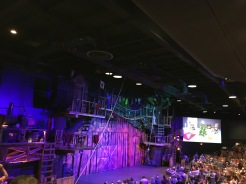 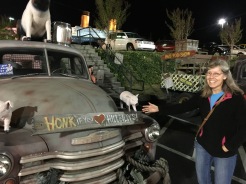 We did not come for the town, so Gatlinburg was lost on us. A sea of people walking up and down the main street near the Park was interesting to see. I believe we would have enjoyed the walking in town had we been staying in Gatlinburg.

No bike riding in the mountains where the roads are narrow and winding. From the Cades Cove camp grounds areas you can go biking a few times per week. As we have seen bears in this area, we did not think we should tempt fate by riding bikes near the bears. It might be fun…with a group. 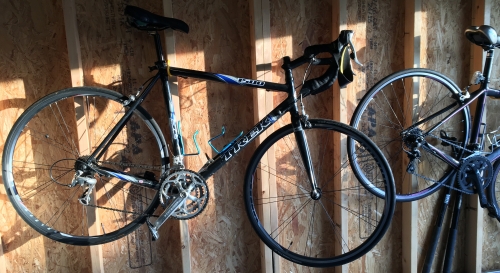 Bikes left in the garage

By Retirement Travels with Glen in Famous Places, hiking, Travel on December 1, 2019.
← Back to Visit Altitude is Real →