It was a cold and wet spring. Not too much time for training on the bike outside. The good news is that Cincinnati has a lot of fun places to go and see.

In between the cold and the rain I was able to go to see the Cincinnati Reds play baseball. First professional game I can recall being at where the temperature was under 40 for the entire game. The Reds played their second game of the season, after their opening win, to a small crowd (18,737) compared to the opening day crowd of over 44,000, one of the biggest at the ball park. Even though the team lost, we were convinced that warm weather was coming. The game was fun and baseball always holds the promise of summer. 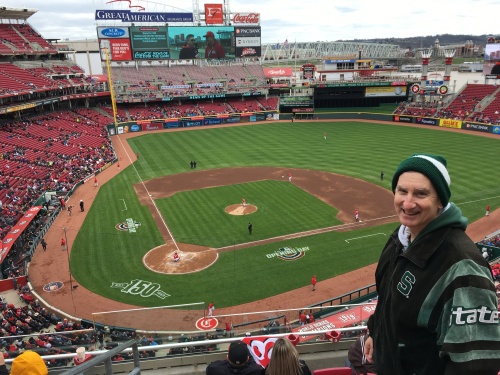 It was expected to rain when I went to see my first professional soccer game. The local club “FC Cincinnati” plays in the University of Cincinnati football stadium awaiting a new soccer stadium in town.  So, it was fitting that I was invited to the game with my son who played in the first soccer game I ever saw. The day turned out nice and even though the game ended in a 1-1 tie, the game was exciting. The crowd, into every kick and pass on the field, seemed to know all the rules. With 26,023 fans in attendance, the noise and excitement was a contrast to the baseball game. Constant noise and cheers came from a fan section called “The Baily” that lent the game an atmosphere of intensity with chanting, drumming and yes, yelling.

The Baily has chants and songs for all occasions. We were able to witness the snake of fans in their orange and blue on the way into the stadium all chanting (Yes, I had to look it up…)

So score a goal, or score a few, Cincinnati, we’re here for you! 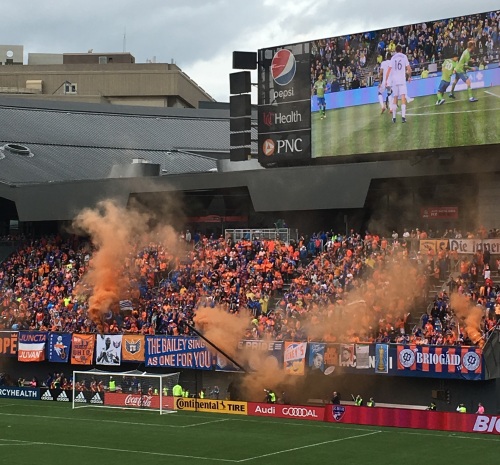 Another tradition in Cincinnati is the Flying Pig Marathon, something I have never done or even been to see in action. I do have friends that have run, including one who ran the marathon for 20 years in a row.  The same son who took me to my first soccer game invited us to see him run in his events. He ran the “3 way with cheese” events, a 1 mile, 5k, 10k and half-marathon on the Flying Pig weekend. He did really well and we were glad to be on the sideline cheering him on.

Before the first run 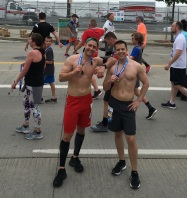 The city is excited about the pig!

My friend who ran all those marathons is also a champion bike rider and has completed a few iron man challenges. I have no desire to run a marathon, let alone run one at the end of a swim and bike ride of over 100 miles. We did manage to do a century ride together at the Horsey Hundred bike ride. 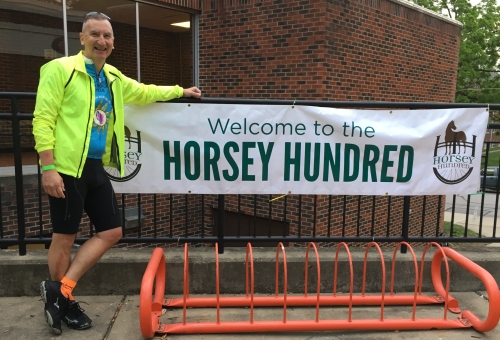 Before the start of the Horsey after we got our numbers and were ready to go to the start. The jacket was short lived and did not make it on the ride.

Each year over Memorial weekend, Georgetown hosts the Horsey Hundred, a bike ride displaying for all who care to bike ride the beautiful horse country area in Kentucky. The organizers directed us on routes past several horse farms; we were impressed and welcomed at the rest areas stocked with friendly volunteers and needed snacks.

The ride was a challenge as the weather in the afternoon turned sunny for the first time in weeks. Too bad I had not trained in the heat or the sun for the ride. I think we were both a little overloaded with the sun when we pulled into the finish after the 100 miles of bike riding. I am thinking my next ride (already signed up for a century ride in September) will see me in better shape for the distance.

Mike and Glen getting our pins for completing the 100 miles.

Spring would not be complete without a visit our local Arboretum. Of course we walked and saw the spring trees blooming and the flowers starting to bud.

The flowers were coming out on the dogwoods just in time for the local dogwood dash.

Thank you Mike! I appreciate you pulling me along on the 100 mile Horsey Hundred event. That was not our first century bike ride together as Mike and I did a 100 miles MS bike ride a few years ago. My favorite comment from Mike was that at least he does not have to get off the bike and run a marathon. Amen to that! It was enough just to finish the ride and drive home.

Training ride along the Ohio river, route 8. A favorite out and back trail ride.